Dear Amy: I have been with my husband for three years. He is White and I am Black. His parents are wonderful to me, and often go out of their way to help us out. They treat me just like their own daughter.

Unfortunately, they have a dog, “Danny,” who is “mean,” according to them.

There are five other dogs that live in that house, and they all love and enjoy the attention I give to them, but Danny has always been wary of me.

I tried giving him treats and approaching him the way they recommended, but he avoids me or barks at me.

I have never done anything to warrant this negative attention.

For the longest time I thought he was just mean, until I went to pick up my son, age 4, who was at their house. He is biracial and is light-skinned.

When I arrived, my son was hugging the dog like an old friend.

I can’t even get this dog to sniff my hand!

This past weekend Danny bit me when I put my hand out for him to sniff. He didn’t break my skin, but he clearly meant to hurt me.

I don’t know what to do, because my in-laws just brushed it off. My feelings are hurt, and I’m not comfortable over there anymore. Is this dog racist? How should I handle this?

Bit: I shared your question with Katherine Houpt, a veterinarian, behavioral biologist, and emeritus professor of behavioral medicine at the College of Veterinary Medicine Cornell University:

“Dogs can certainly tell the difference in people by race (after all, they can tell the difference between identical twins), but they should not bite people based on race. ‘Danny’ probably does not like any visitors, and the more ‘unusual’ they look to him, the more aggressive he will be.

“Your in-laws mentioned that he was a ‘mean’ dog, so you have not been Danny’s only victim. He also has four other dogs in his pack, which makes him even braver.

“You were bitten in part because you stretched out your hand, which he may have interpreted as a threat. You should keep your hands to your sides (we tell children to ‘act like a tree’), and don’t look directly at Danny, because a direct stare is a threat.

Your in-laws should find a good trainer who uses positive methods (not shock or pinch collars) to train the dog or, even better, a veterinary behaviorist. Meanwhile, you can reasonably ask that he be put in another room (or his crate) when you are coming over.”

She and I are concerned about your son. She says, “Small children are the most frequent victims of dog bites, and those bites come from dogs they know. Hugging a dog is often the trigger for aggression, because most dogs don’t like to be hugged.”

Check “The Family Dog” website, stopthe77.com, for a helpful video on the best ways for young children to relate to the dogs in their lives. (c) Ask Amy

I’ve got a bit of insomnia tonight, but fortunately Ask Amy is onhand to entertain me.

Is this woman nuts?! She’s more concerned about the dog’s racism than she is about his close proximity to her four-year-old child! No, just no. Priorities, people. Please.

I would NEVER let a child of mine hug a violent dog. I get it that the hug happened before the letter writer was bitten, but look at her lackadaisical attitude! Instead of viewing the dog as a geniune threat, not only to herself but to her young child, she’s hung up on the dog’s alleged racism. That four-year-old kid was lucky to not be mauled, and that situation definitely needs to not recur.

Those of you who know me know that I had a violent dog named Sammy Samson, and he ultimately had to be put down due to his violent ways. It broke my heart and made me cry. I know not everyone agrees with me on this, but I don’t think there’s room on our planet for violent dogs.

Racist dogs, though… huh. Now, would a racist dog only like dogs who share that dog’s fur color? How does that work? Or maybe all racist dogs hate cats. No, that would be, uh… species discrimination. And here’s an age-old question: would every non-purple animal alive discriminate against a purple cow? 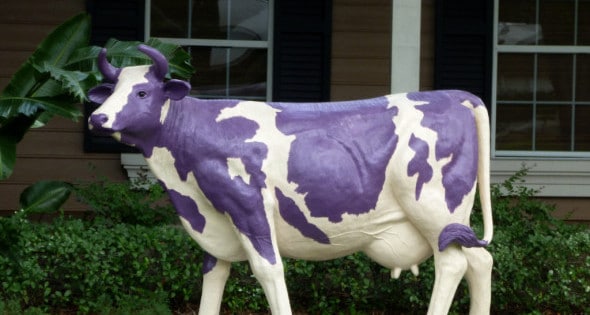 I wouldn’t be so glib about racist dogs if the letter writer weren’t such a twat who’s endangering herself and her young son. One thing that needs to be understood about pets (and animals in general) is that their minds don’t work like human minds. I find this letter writer’s lack of comprehension in that regard to be odd and hard to explain.

Why do I want to drink some purple milk?

DEAR ABBY: My husband and I have been together for almost 10 years. He’s my dreamboat, everything I ever wanted in a man. Although he doesn’t have a history of cheating, he is flirtatious.

My husband fixes computers. Last year, when my best friend’s computer wouldn’t turn on, he was happy to help. I just found a naked picture of her on his computer. When I confronted him, he confessed he stole it while he was fixing her computer. When I told my friend, she kind of blew it off. (“Men do stupid stuff …”) I don’t know if I can trust him again and I feel beaten down. I have been hurt several times before in prior relationships. Abby, what do I do? — SHOCKED IN NEW JERSEY

DEAR SHOCKED: Your best friend’s reaction was unusual. Most women would be mortified over this scenario. Your husband’s behavior was shameful. He should delete the photo he stole and apologize to you and your friend for the “stupid stuff” he did. And, because this has damaged your ability to trust your husband, insist on some sessions with a marriage and family therapist to see if the damage to your relationship with him can be repaired. (c) DEAR ABBY

Oh, no. This is disastrous. I can’t help but wonder if her husband is having an affair with her best friend. The reaction about how men do stupid stuff seems to be suggestive of an affair rather than the photo having been stolen. If someone did that to me (not that I have any nude photos of myself anywhere), I’d be furious and outraged and ready to sue.

It’s possible, of course, that there’s no affair. Either way, this letter writer needs to do some major soul-searching to understand why she keeps getting involved in relationships that seem okay on the surface but are teeming with issues in reality. I honestly feel sorry for her. It’s scary how much we want to believe in our relationships, but at the heart of the matter, we can’t be inside the other person’s head. We can search their computers, but we can’t understand what exactly makes them tick. We can think we have a great relationship without knowing the truth that lies hidden in small corners. This is a tough fact to accept.

This letter writer needs more info. She should gather intel from his computer, a private eye, and/or other sources. But I just have a bad feeling.

2 thoughts on “Priorities and secrets.”