So, I’m a grumpy-pants who’s been eating a lot of chocolate to survive menstruation. Other than that, I’ve been sticking to my diet. Well, not counting Memorial Day. We ate ribs, potatoes, cornbread… Well, okay, I’ve stuck to my diet otherwise. Hmm. [Rolls eyes in a shifty manner.]

In good news, the leap of faith I took in buying the tea maker with my birthday money has paid off! I was hoping I could find some tea that would taste so good that it didn’t require being sweetened, whether naturally or artificially. (I’m trying to drink less sugar, but I can’t have artificial sweeteners for health reasons.) And, holy flip, I succeeded. You remember that dessert tea I ordered from Amazon? 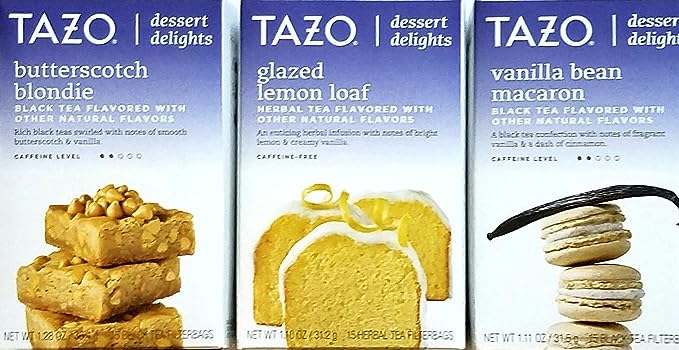 I don’t think it’s unhealthy, as its name implies. Rather, they shared my goal of making a tea that could be drunk without having to sweeten it. It’s just tea with natural ingredients added. And it freakin’ tastes great!! No sugar or other sweetening required. Heck yeah.

I’ve only tried the lemon loaf so far. It tastes like you’re drinking a lemon cookie! For flip!! The other two varieties also have yummy-scented teabags, so I’m hopeful for them as well! But the lemon alone is a fabulous find.

What this means for my diet, both short-term and long-term, is that I no longer need to drink sugar ever. This is amazing. And right now, it’s one of only a few things that are going my way in a dietary sense. I still lack the will power to exercise (but I’m getting there), and I’d give myself a B for overall eating; I do stick to my Kodiak waffles often, but there have been a few slip-ups as noted above.

I used to drink, I don’t know… maybe 600 calories’ worth a day? This non-sugar adjustment ought to lead straight to weight loss. I’ve graduated from the Monin flavor syrups! Go me! I’ll never have to worry about becoming diabetic. This is all good. Now if I could just manage to actually lose some weight from all this! (Did I mention what a grumpy-pants I am today?)

I also ordered some yacon syrup on Amazon. It apparently has amazing health benefits–everything from improved bone density to weight loss to I don’t know what else. I went to the local Rainbow Blossom natural foods store to buy some, and things got sort of funny. I was searching the sweeteners aisle, and they had everything under the sun except for yacon syrup. An employee was nearby, so I asked her if they had any.

“Oooh,” she said. “You know what? We don’t. We carried it a few years ago, but then it quit being trendy.” She shrugged.

Okay, so, no huge deal. Amazon sells everything. I’m taking a leap of faith on this, too, because it costs a lot, and if I don’t like it, I’ll be out all that money. But if I do like it, I can eat it as my waffle syrup (in lieu of my regular maple syrup) and get all the health benefits from that small recommended amount each day. (I think I eat about a spoonful with each meal. I use it as dipping sauce in a tiny Dixie cup rather than drenching my waffles with syrup.) That would be great.

So things are looking up. I’m just a crabapple.

I also have some fun ideas for earning supplemental income. I enjoy selling things on eBay, and I have furniture rehab skills, so I think I’m going to become a buyer of expired storage bins. What you do is buy what someone abandoned and then sell it for a profit. (I hope.) I’m pretty excited to try it out!

Okay, I get the picture, Large Flatulent Marge. (See, when I’m crabby, I argue with my alter ego. It’s ridic.)

Anyway, life is looking up. I just need to catch up with the happy times! The yacon syrup is coming tomorrow, and I’m excited and hopeful that I’ll like it! I’ll keep you guys posted.

6 thoughts on “The dessert tea is THAT GOOD.”