I have some good news to report. Although I haven’t spent much time on my competition forum lately, I’ve been there off and on, and nothing like what happened a few years ago in January has recurred. I think perhaps it was a fluke, and/or now everyone knows how to avoid it. I have more trust for the forum environment than I used to. Granted, it’s cliquish. There’s a clique of “cool kids” that I don’t want to belong to. I’m fine with that. There are plenty of worthwhile people there, as well as newbies, to keep me occupied. We’ve all somehow managed to do our own separate things there.

This makes it sound as if I hang out there a lot. Not really. But I guess it adds up over the years.

In other news, did you guys know that “dessert tea” is a thing? Well! Amen. I’m going to try this stuff right here: 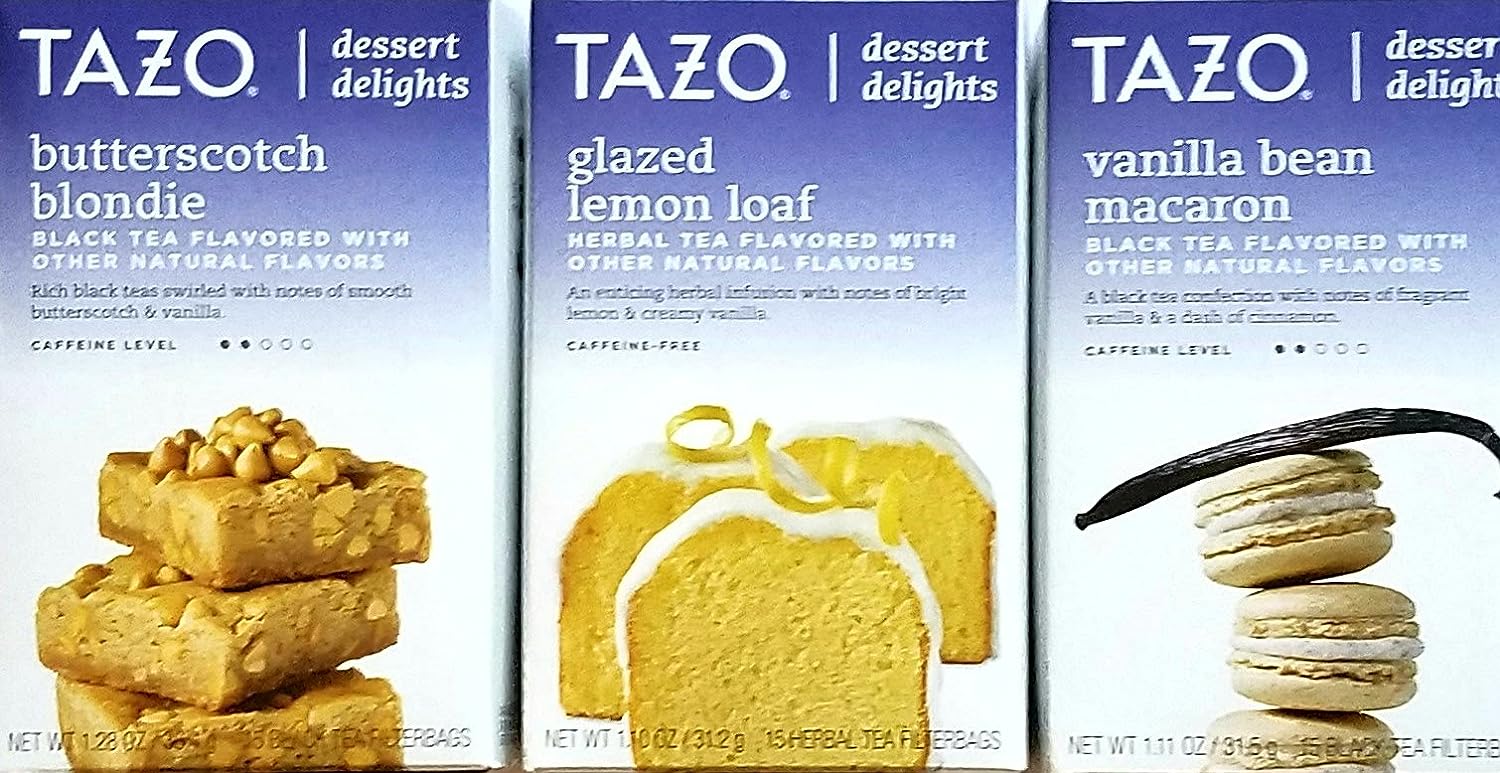 It’s sugar-free and not artificially sweetened, which makes it as healthy as any other tea, for the most part. It’s exactly what I’ve been looking for: a way to drink great tea that works on its own without needing sweetening. Lemon! Vanilla! I can’t wait to try it. They’re coming in the mail on Tuesday.

I’ve been sugar-free (with beverages; not food) for a week or so. (My concept of time is sketchy. When did my tea maker come in the mail?) It’s going great! I’ve been drinking straight tea (no sugar or artificial sweeteners) and water, sometimes with a few frozen berries thrown in for infusion.

My research led me to discover something called yacon syrup. It’s apparently a super-food that’s also a naturally occurring sweetener. Since it’s natural (versus sucralose, for example, which is made from sugar in a multistep chemical process in which three hydrogen-oxygen groups are replaced with chlorine atoms and thank you Healthline), my system might be able to tolerate it. (Artificial sweeteners cause me to urinate indiscriminately. That’s the funny way we like to put it. Makes it sound more glamorous than the reality. Indiscriminate urination.)

I might try the stuff. I mean, the yacon syrup. I bet it tastes awful. But I might be able to use it as a replacement for my waffles’ maple syrup. (I put about a tablespoon in a Dixie cup to use as dipping sauce. No overindulgence, but why not swap it out for a power food?) That would rock, right? This yacon syrup stuff can aid with weight loss, and it has other health benefits too. I read this article here, also at healthline.

I’d like to order some online, but I’m broker than broke. More money will be forthcoming! My eBay auction of the antique napkin holder has six watchers eager to snatch it up in a few days. I love last-minute bidding. Often, it’s the only bidding my auctions get at all. [Rolls eyes at self.]

I’m hoping for major bidding, because this calendar month has been a total financial failure. I was doing so good this year, and then my birth month (which is also mental health awareness month–go figure) came, and I bought myself a million presents. I think I can get back in gear soon. Being a sensible spender is like dieting–you take a deep breath, hold it for as long as you can, and then go under. (That made sense when I started the sentence. Not sure it still does.)

I made a few funny fish tank videos. Here’s the first one. In this one, my intrepid fish are doing a coordinated dance number to a techno beat.

Here’s the second one. It’s an old-fashioned television show starring Little Green Baby Fish as himself.

Oh my gosh, I crack myself up.

Here’s an excerpt from the novel I just started writing recently. Being on page 10, it’s not really spoilerish.

I see her now, the girl of my nightmares. She’s in a large backyard behind some squat brick rowhouses. Scrutinizing the sky, waiting for my arrival.

I’m still airborne as I approach her. The moment I touch down, I try to flee. No such luck. She lurches after me and grabs my arm, swinging me around until I’m facing her. She clutches both my wrists with her harsh, talonlike fingernails. Pain sluices through me, but I still don’t wake up. I’m never able to awaken while she’s got me in her grip. I shriek and start to cry.

“Shut up,” she hisses. Her face morphs into a serpentine monster’s face. She leans toward me and bites my neck with her fangs.

“What do you want?” I ask. “Please, just tell me.” Blood squirts from my neck.

“What do I want?” She reverts to human form, not that that’s much comfort. Her human self looks exactly like me. The only difference is her eyes. They glow with hatred and burn with malice. “I want you to join me, little girl. You and me, we’d make a great team.” She grins with her blood-coated teeth. Her eyes turn black as scraggly worms pour from her eyelids like elastic tears of the damned.

She turns her head and breathes fire onto a nearby pile of straw. It combusts. “If you won’t join me, you can burn.” She pushes me toward the bonfire.

“Leave me alone! Please, I’m begging you. I’ll do anything.” I try to pull away.

“Never.” Blessedly, she loses interest in the fire and stops walking, but then she smacks me in the face. Hard. She’s still gripping my right arm with her left. “You can’t escape me. Know why?”

Leaning toward me, she exhales all over my face. Her breath reeks of hot sauce. “Because you are me. And I’m you.”

My life has been great lately! Fun creative projects and great times! I attribute it to the absense of my mother, who I gave the axe to after she ruined my birthday with her narcissistic ways. I’ve never been happier!

6 thoughts on “I’ve never been happier!”